Ghanaarticles.com brings you the wrap of the first two games played last night in the Champion League quarter-finals stages.

The second game of the night was between Manchester City playing at home against Borussia Dortmund.

Liverpool’s Champions League hopes suffered a huge blow as Real Madrid roar to a 3-1 victory in the first leg of their quarter-final tie in Spain.

Jurgen Klopp’s Reds paid the price for an error-strewn display and now face an uphill battle to turn it around at Anfield next week. 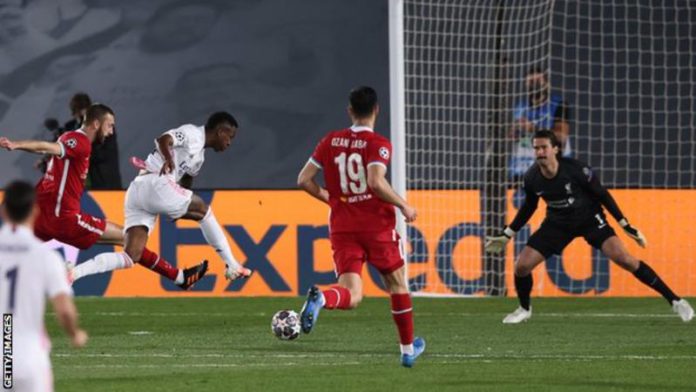 Real dominated from the off and deservedly took the lead on 27 minutes when Vinicius Junior brilliantly chested down Toni Kroos’ raking ball over the top and fired a low strike past Alisson.

It was too easy from the visitors’ perspective, but they didn’t learn their lesson and the home team doubled their advantage nine minutes before the break.

Another high through ball from Kroos caused Trent Alexander-Arnold to panic and head straight to Marco Asensio, who coolly flicked it over Alisson and hooked in from close range.

The Merseysiders improved markedly after the break and Mohamed Salah grabbed an away goal on 51 minutes when he converted Diogo Jota’s deflected shot in off the bar.

However, Zinedine Zidane’s men restored their two-goal cushion past the hour when Vinicius Junior somehow squeezed a first-time shot from Luka Modric’s pass beyond Alisson.

Manchester City will take a narrow lead to Germany after emerging with a 2-1 win from their hard-fought first-leg encounter against Borussia Dortmund at the Etihad.

The game started brightly for Pep Guardiola’s side, and they took an early lead when Emre Can’s misplaced pass in midfield was ruthlessly punished, with Phil Foden and Riyad Mahrez combining to tee up Kevin de Bruyne to slot home. 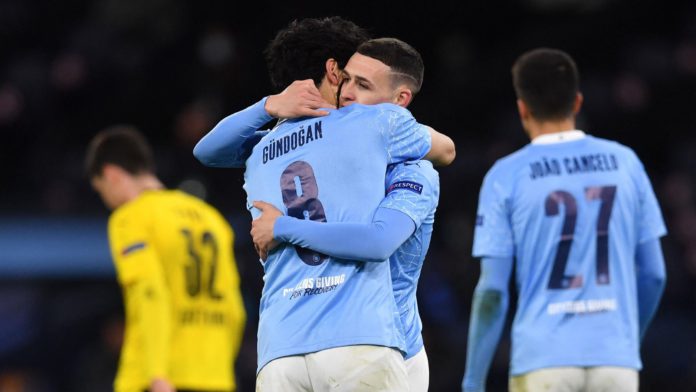 Dortmund never looked out of the game, and the visitors got the away goal that their performance merited on 84 minutes. Jude Bellingham and Haaland combined cleverly to work Reus into space inside the City box, and the captain made no mistake with his effort, drilling a fine shot across the keeper and into the far bottom corner.

But, just when it looked like the German visitors had secured a draw, up stepped De Bruyne to whip in a brilliant cross towards the back post, and Ilkay Gundogan teed it up for Foden to slot home and give City a narrow advantage in the tie.