Edinson Cavani and Bruno Fernandes scored two goals apiece as Manchester United come from behind to beat Roma 6-2 in a thrilling first leg of their Europa League semi-final.

Ole Gunnar Solskjaer’s side began well and took the lead through Bruno Fernandes’ fine finish after trading passes with the Uruguayan.

But the Italians levelled six minutes later when Paul Pogba was penalised for a handball with Lorenzo Pellegrini scoring from the spot.

Roma took the lead against the run of play when Pellegrini turned provider to set up former Manchester City striker Edin Dzeko from close range.

In the second half courtesy of a stunning first-time finish from Cavani from Fernandes’ weighted pass.

The former Napoli striker grabbed his 12th of the season from close range after Aaron Wan-Bissaka’s low shot was parried.

Former United defender Chris Smalling then conceded a penalty with a tackle on Cavani and Fernandes stepped up to rifle home the spot-kick.

Fernandes was involved again for his side’s fifth goal with a delicious cross which was headed in by Pogba.

And substitute Mason Greenwood scored the sixth from Cavani’s pass to seal the rout to put United in total control going into next Thursday’s second leg.

Villarreal claimed a narrow advantage in their Europa League semifinal against Arsenal with a 2-1 home victory in the first leg on Thursday, although they will feel frustrated at letting the London club off the hook.

First-half goals by Manu Trigueros and Raul Albiol put the Spanish club in command and it looked bleak for the visitors when Dani Ceballos was sent off just before the hour mark. 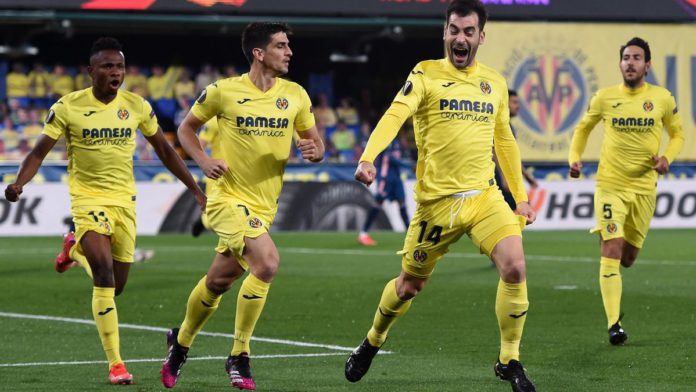 Arsenal were  thrown a lifeline when Nicolas Pepe converted a 73rd-minute penalty.

The tie remains delicately balanced ahead of next week’s return in London.